VoIP Deregulation in Iowa and Vermont 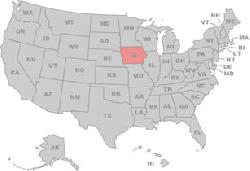 Two states, Iowa and Vermont, treat VoIP differently than other telecommunications and assert special authority to regulate it as needed. This means that VoIP providers and the telecommunications industry in general need to pay particular attention to the regulations of these states, not just the rules set down by the Federal Communications Commission. It is a question of control by Iowa versus a national standard for all states.

HSB 590 seeks to deregulate VoIP in Iowa, which of course has drummed up wide support from the telecom industry. While few lawmakers in the state have given it much attention, more than 40 lobbyists from companies such as AT&T and Verizon are registered on the bill.

“While little attention has been given to it, you’d be hard pressed to find a Commerce Committee member in either chamber who has not been lobbied — likely multiple times — on this,” said Anthony Carroll, who lobbies for AARP.

Representative Bob Kressig (D-Cedar Falls), a subcommittee member on the Commerce Committee discussing the bill, admitted that the bill is a big deal, and drawing much attention from the industry. “I’m not an expert on VoIP,” Rep. Kressig told the Globe Gazette, “but I’m growing close.” The bill was introduced last year, but it sat largely untouched until the utilities board opened a Notice of Inquiry process, according to the Globe Gazette. It received 31 sets of written comments from 15 companies. The majority, it said, favored a “technology-neutral” approach to regulation.

On February 6, the board held hearings on the bill. To the consternation of the industry, it was decided that more review needed to be performed before going forward to a full committee review of the bill. Representatives of the utilities board and the Attorney General’s Office warned that moving too soon and eliminating the consumer protections those agencies provide Iowans was a bad move, as the bill would effectively make VoIP different from other telecommunications because it would be deregulated.

Multitel is a telecom solutions provider. We empower your telecom voice switches with e911 services, international phone numbers, texting/sms and CNAM services. Our API provides unrestricted access to our services enabling you and your customer to use and benefit from our solutions. Integration services are also available.